My daughter recently had a Science experiment to perform and we put our heads together and I made a few suggestions in ways to find Positive vs Negative energy and how it works in our lives. It was a really fun project to work on together, so I thought our findings may be interesting to you too!!

WHAT ARE YOU PLAYING/WATCHING? I had heard about a test to tell if a particular video game had positive or negative energy. OUR TEST: We gathered up 7 different types of video games/movies (Playstation Destiny, Wii Daring Game for Girls, Crash Bandicoot, Wii Leela, SourceCode (PG-13 movie), Wii Christmas game, Wii 007 game), Put them in empty boxes with no covers (so no one knew what was inside). We then took six kids (ages 8-12) and had each kid hold each video & feel if it made them feel stronger or weaker. As the parent I would push down on the arm holding the video/game & could feel if it made them stronger or weaker. We then looked inside to see the results. It was fascinating.  The results were on target every time. The negative (violent–Destiny, 007, SourceCode) games would make the child weaker in their physical strength.     You may be skeptical at this moment, but I wanted someone else’s opinion. We were visiting my brother-in-law (Harvard grad) & thought he would be a perfect one to get in on this test, especially since his boys play video games non-stop!! He was a little skeptical and wanted to see it for himself. He took the games & tested them on his son. He couldn’t believe it!! He could literally see and feel the difference in the physical change. It was amazing!! Try it out yourself. Just know this—adults are a little more hard to determine because they try so hard to physically stay strong & you need to have harder (prob R) rated violence to get results. My belief—Adults are slightly jaded to negative energy. Try it and see for yourself. Good luck!!

WHAT ARE YOU SAYING? In this experiment we took the information from Dr. Emoto’s work with rice. Here is a link to his experiment:

We did the same thing. We took rice & placed the same amount into two different containers. We labeled ours “I hate you. You are Stupid” and “I Love you” After about 2.5 weeks they both had mold, but the negative labeled rice had more mold. Many people have conducted this experiment and have been amazed at what happens. While I was at my daughter’s science fair I talked with a couple who had done this experiment with their family over a year ago. They shared how the positive rice never got mold & is still mold free after a year. WOW!! They said the Negative rice turned black.

Here was another great illustration of this idea: 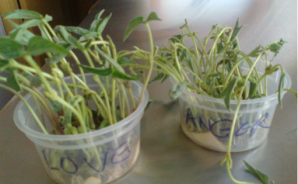 To begin, the children were given 2 plastic containers with a bunch of green beans and cotton pads. The task was to grow the beans sprouts in 2 separate containers, one marked with ”Love” & the other container marked with “Anger”. Each day they were to talk to the green beans. The container with “Love”, they had to say all sorts of positive things, direct their positive energy toward it and talk to it with love and compassion.  On the other hand, for the container marked with “Anger”, they had to direct anger and talk to it negatively, even to shout at it. After one week, they brought their 2 containers of beans sprouts with much enthusiasm and showed me the visible difference in terms of how the growth of the beans sprouts.  See photographs below. One could visibly see the “Love” beans sprouts grew healthily taller with luscious leaves whereas the beans sprouts in “Anger” containers had stunted growth or some died prematurely with dried leaves. – See more at: http://yourpresenceheals.com/love-vs-anger/#sthash.XQ5iIL9d.dpuf

Try it out and see for yourself. It is a good experiment to try with your family & share the lesson of how words have an affect. 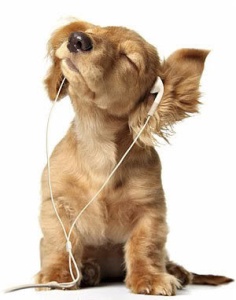 WHAT ARE YOU LISTENING TO? We did some research on music and its affect and the results were pretty amazing and also disturbing. We came across David Merrill’s project on Music and Mice. Here is the description of the experiment. It is pretty alarming. Sixteen-year-old David Merrill, a student at Nansemond River High School in Suffolk, Va., thought that the loud sounds of hard-rock music must have a bad effect on its devoted fans and came up with a way to test that damage.
Merrill got 72 mice and divided them into three groups: one to test a mouse’s response to hard rock, another to the music of Mozart and a control group that wouldn’t listen to any music at all, rock or classical.
The young vivisectionist got all the mice accustomed to living in aquariums in his basement, then started playing music 10 hours a day. Merrill put each mouse through a maze three times a week that originally had taken the mice an average of 10 minutes to complete.
Over time, the 24 control-group mice managed to cut about 5 minutes from their maze-completion time. The Mozart-listening mice cut their time back 8-and-a-half minutes.
But the hard-rock mice added 20 minutes to their time, making their average maze-running time 300 percent more than their original average.
Need we say more? Well maybe we do. Merrill told the Associated Press that he’d attempted the experiment the year before, allowing mice in the different groups to live together.
“I had to cut my project short because all the hard-rock mice killed each other,” Merrill said. “None of the classical mice did that.” (taken from edu-cyberpg.com)

Another interesting experiment was Music and Plants done by In 1973 Dorothy Retallack at the Colorado Women’s College in Denver wrote a book The Sound of Music and Plants (it’s still for sale). Her research consisted of playing different music to identical groups of plants, one group got rock and another easy listening. After two weeks, the plants in the soothing-music area were uniform in size, lush and green, and were leaning between 15 and 20 degrees toward the radio. The plants in the rock music chamber had grown tall but were drooping, the flowers had faded and the stems were bending away from the radio. By the end of two weeks, most of the plants in the rock music chamber were dying whilst the easy listening ones were growing abundantly. 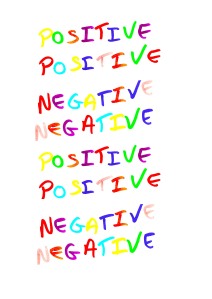 All the experiments were very useful in trying to find Positive vs Negative energy and how what we say, listen to, play, and watch can definitely have an impact on our lives. I challenge you to take this information to your families, do some of your own experiments to see for yourselves the positive and negative things we put into our daily lives.

-Peace to you. Heather