I am always amazed at the fight and fortitude of my sweet daughter. She is currently in the 9th grade and has strived for 100’s her whole life. This was the first year (the year things begin to count for high school) that she was told by a few of her teachers, “You don’t have to get 100, you can still get an A even if it is above 93.”

My daughter is determined. Someone her age told her last year that getting 100 all the time was impossible, so I think that is a little spark that continues to inspire her. She keeps giving and doing and not giving up. She want’s 100. She goes over and beyond and her will to do her best is inspiring to me.

If we all could find that glimmer, that spark to go a little farther, to work a little harder and live to our potential, that would be a gift to us all.

There is a world full of people, but I do believe there are select few who truly live up to their purpose, their potential. I admire that & will not be the one to stop her from striving to do her best.

HOW COULD WE ALL STRIVE TO GO A LITTLE FURTHER??

I am going to look at SOME of histories greats and see if I can find some good tips, to do lists, success lessons that we can all learn from.

A book that changed her life, “Seat of the Soul” by Gary Zukav.

“In it, [Zukav] talks about how every action is followed by a reaction, which we all know is the third law of motion in physics,” explains Winfrey. “But he also said, before there’s even a thought or an action, there is an intention.

“Something struck me about that,” says Winfrey. “That an intention precedes every thought and every action, and the outcome of your experiences is determined by the intention.”

“THIS PRINCIPLE OF INTENTION IS LITERALLY WHAT SAVED AND CHANGED THE TRAJECTORY OF MY LIVING.”-Oprah Winfrey, media mogul  https://www.cnbc.com/2017/06/15/the-one-book-that-changed-oprah-winfreys-life-and-business.html

How do you find your own flow? Here are the four things you need to know to make the right decisions and be successful in work and life, according to Winfrey.

“EVERY DECISION I’VE EVER MADE THAT LED ME TO THE RIGHT SPACE AND PLACE IN MY LIFE, I GOT THERE BECAUSE I RELIED ON THAT INNER VOICE.”

1. What is your inner voice telling you?

“Everybody has what I call this instinct, this inner voice,” says Winfrey at Skidmore. “Every decision I’ve ever made that led me to the right space and place in my life, I got there because I relied on that inner voice.”

2. What is your intention?

3. What are you grateful for?

“I practice being grateful,” says Winfrey, and she knows what you’re thinking. “And a lot of people say, ‘Oh Oprah, that’s easy for you ’cause you got everything!'”

No, says Winfrey: “I got everything because I practiced being grateful.”

In 1998, Winfrey was sued for defamation by a group of cattle ranchers to the tune of $10.3 million for “saying something bad about a burger.” (Google it, she says.)

“Everybody goes through trials — I just happened to be in an actual trial,” says Winfrey. “There’s going to be a trial in your life,” she tells the Skidmore graduates. “It may be disease, it may be jobs, it may be any number of crises that stand outside yourself to try to tell you who you are.

“And it is your job to know the truth” of who you are, says Winfrey. “And let that truth set you free.”  https://www.cnbc.com/2017/05/23/oprah-winfrey-these-are-the-4-things-you-need-to-know-for-success.html 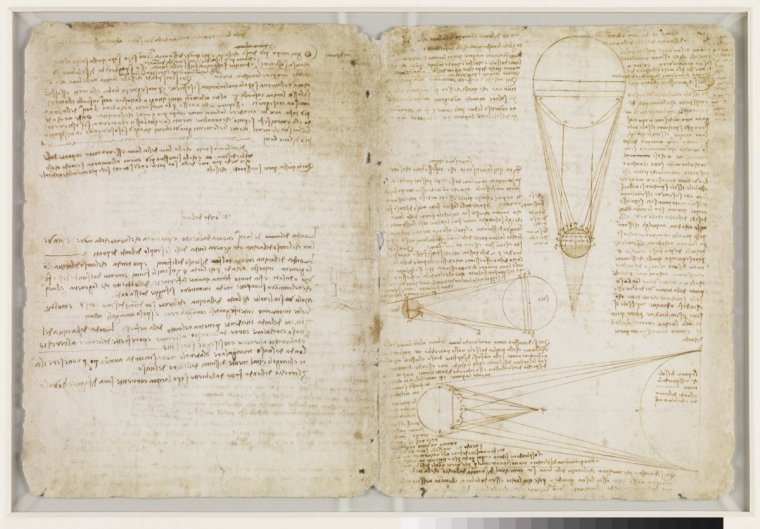 He was a painter, architect, inventor, and student of all things scientific. He is best known for his art, including the famous, Mona Lisa painting.

He would carry around a notebook where he would write down anything that “moved him.”  Buried in one of these books, dating back to around the 1490’s, is a to-do list. Check this out. Here is a sampling: Calculate the measurement of Milan and Suburbs, Get the master of arithmetic to show you how to square a triangle, Examine the Crossbow of Mastro Giannetto, Find a master of hydraulics and get him to tell you how to repair a lock, canal and mill in the Lombard manner, Ask about the measurement of the sun promised me by Maestro Giovanni Francese…(that is not everything) You can just feel Da Vinci’s voracious curiosity and intellectual restlessness. Note how many of the entries are about getting an expert to teach him something, be it mathematics, physics or astronomy. Also who casually lists “draw Milan” as an ambition?
http://www.openculture.com/2014/12/leonardo-da-vincis-to-do-list-circa-1490-is-much-cooler-than-yours.html

Stephen Hawking , he is considered one of the most brilliant theoretical physicists since Einstein. He authored a brief history of time, an international best seller, From 1979 to 2009 he was the Lucasian Professor at Cambridge, a position held by Isaac Newton in 1663. Professor Hawking has over a dozen honorary degrees.

Some of his quotes to live by…

Advice he shared with his children: “Look up at the stars and not down at your feet. Try to make sense of what you see, and wonder about what makes the universe exist. Be curious.”- Stephen Hawking

Don’t give up: “The victim should have the right to end his life, if he wants. But I think it would be a great mistake. However bad life may seem, there is always something you can do, and succeed at. While there’s life, there is hope.”

Nothing is perfect: “One of the basic rules of the universe is that nothing is perfect, Perfection simply doesn’t exist…without imperfection, neither you nor I would exist.”

Matter of attitude: “People won’t have time for you if you are always angry or complaining.”

Matter of purpose: “Work gives you meaning and purpose and life is empty without it.”

Matter of perspective: “When one’s expectations are reduced to zero, one really appreciates everything one does have.”

Here is some actual information from some of Richard Branson’s To Do Lists. Branson emphasizes his “love of writing lists” and how it started from a young age. “Lists not only provide great structure for getting things done, but they also help us to set goals and achieve our dreams,” Branson wrote. Way back on a list from 1972 he listed, “Learn to fly, open more Virgin Record Stores, clean up…”

Fast forward 45 years and take a look at where Branson is today. He has a net worth of about $5 billion and is the founder of an organization that houses more than 450 companies. It’s safe to say Branson is doing more than OK. In part, he thanks to-do lists for this.

You’ll never be successful if you don’t love what you do and wake up every morning excited. “Those people who spend their time working on things they love are usually the ones enjoying life the most,” Branson says. “They are also the ones who dared to take a risk and chase their dreams.”

According to Branson, “if you aren’t making a positive difference to other people’s lives, then you shouldn’t be in business.” This goes not only for individuals, but companies as a whole, Branson says.

3. Believe in your ideas

If you aren’t advocating for yourself, you’re not giving anyone else a reason to. As Branson says, “If you aren’t proud of your idea and believe in your plans, why should anybody else?”

Though often underrated, Branson calls fun one of the most important ingredients in any successful business. “If you’re not having fun, then it’s probably time to try something else,” he writes.

The concept of having fun has driven some of Branson’s most successful businesses, especially when he was first starting out. When he went to the CEOs of Virgin Music with the idea of using a third of the company’s profits to start an airline because he believed it would be “fun,” they weren’t entirely on board, Business Insider reports. But Branson persisted and Virgin Atlantic, one of the company’s most well-known properties, was born.

“On every adventure I have been on — whether setting up a business, flying around the world in a balloon or racing across the ocean in a boat — there have been moments when the easy thing to do would be to give up,” Branson writes. But, by sticking things through, he’s propelled himself to immense success, both personal and professional.

Branson’s onto something with this tip. Psychologist and MacArthur “Genius” fellow Angela Duckworth spent years researching achievement, and found that talent by itself is only one factor. Success also requires determined effort, and lots of it.

“Without effort, your talent is nothing more than your unmet potential,” Duckworth writes in her book, “Grit: The Power of Passion and Perseverance.”

“If you don’t write down your ideas, they could be gone by the morning,” Branson says. He solves this problem himself by making lists of every kind, from ideas for companies to upcoming plans.

“Write down every single idea you have, no matter how big or small,” he wrote in a blog post. And then challenge yourself to follow through. You never know what’s going to hit.

Learning that you don’t have to do everything yourself is a difficult skill for many entrepreneurs, but it’s worth it. “If you find people who can take on tasks you aren’t good at, it frees you up to plan for the future,” Branson writes.

8. Look after your team

Your personal success matters, but so does the success of your team. Branson points out the importance of fostering a welcoming, safe and innovative work environment: “If your staff are having fun and genuinely care about other people, they will enjoy their work more and do a better job.”

It’s also crucial to hire the right people. “Find people who look for the best in others, praise rather than criticise, and love what they do,” Branson writes.

Success — and adventure — isn’t going to come to you. You’ve got to go find it. “Rather than sitting in front of a screen all your life, switch off the TV or the computer and go out into the world,” Branson says.

10. When people say bad things about you, prove them wrong

To thrive, you must be prepared for critics and copycats.

“Some people will react to success by trying to hang onto your coat tails,” Branson warns. “The best thing you can do is to not only ignore them, but to prove them wrong in every single way.” 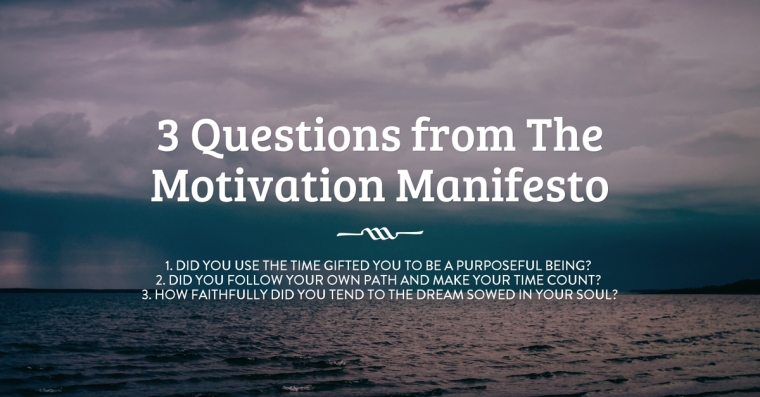 LESSONS from someone who wrote THE MOTIVATION MANIFESTO:

Brendon Burchard survived a horrible car crash & had what seems like a life awakening. He began asking people three questions: DID WE LIVE? DID WE LOVE FULLY? DID WE MAKE A DIFFERENCE and DID WE MATTER?   That is all I have to say about that.

After diving into SOME of these greats I have realized how there are SO many more out there, so I may have to do additional blog posts on other people who have overcame, lived with purpose, went beyond and found their own kind of brilliance!! It is so motivating and fun to read life lessons, quotes and inspiration from so many incredible people.

We can all strive to do more with our lives. Love it!!