“WE SHARE SUCH A BEAUTIFUL WORLD. IF NOTHING ELSE, MAY WE ALWAYS FIND COMMONALITY AND CONVERSATION ON THAT BASIS.” -Melanie Charlene

This year is the 50th year of Earth Day. The earth has been sick with a human illness for some time—pollution of various forms–light, sound, movement, smog, debris, deforestation, destruction, etc. It has been overwhelmed by excess and for the first time in a very long time it has had a moment to truly breathe.

This pandemic is not to be belittled or reduced in any way of the horrors and heartache it has brought to our beautiful globe, but one tiny glimmer of something good, is the little ways nature has been able to shine a little brighter for once.

There have been amazing stories of humans sharing, giving, selflessly living & I hope I have had some posts that have shined a little light there. But today, I wanted to share some things you may or may not hear about happening in nature & affecting our incredible planet for the good.

As people around the globe take precautions against COVID-19, “I think one of the interesting things about it is, wow, the earth bounces back,” says FGCU professor of ecology and environmental studies, Dr. Win Everham.

Here are some beautiful things our earth has been gifted through all this:

China residents had not seen the beautiful, blue, clear skies because of the lack of pollution they usually had because of the immense sanctions on travel and business. Most of its 11 million inhabitants have been confined to their homes and industry, plus travel effectively came to a halt. This resulted in a 10-30% drop in emissions over the period. -Interestingengineering

Italy waterways became crystal-clear due to the reduction in tourism. Fish are now seen swimming in the canals. Locals say it has not been this clear in over sixty years.

In Europe, satellite images show nitrogen dioxide (NO2) emissions fading away over northern Italy. A similar story is playing out in Spain and the UK. -bbc

In New York Compared with this time last year, levels of pollution in New York have reduced by nearly 50% because of measures to contain the virus. -bbc

According to Nasa the earth is vibrating less

Leatherback Sea Turtle Nests: Thailand has discovered the largest number of nests of rare leatherback sea turtles in two decades on beaches bereft of tourists because of the coronavirus pandemic, environmentalists say.  -The Guardian

Another endangered Sea Turtle: In Playa Paulisa, Brazil the Critically endangered Hawksbill Sea Turtles were able to nest because of the lack of people on the beaches & over 100 hatched this season.

Animals everywhere are enjoying the break from human activity: In Chile big cats (Cougars) ventured back into some of their traditional range. In Yosemite Bobcats, bears and coyotes were found exploring. In the oceans, a reduction in shipping traffic has meant less acoustic pollution in the water. Marine biologists surmise that sensitive marine mammals are getting a break too. An ‘extinct’ formosan clouded leopard spotted in E. Taiwan -happyeconews

Views of the Himalayan Mountains: (CNN) — People in the northern Indian state of Punjab are reacting with awe at the sight of the Himalayan mountain range, which is now visible from more than 100 miles away due to the reduction in air pollution caused by the country’s coronavirus lockdown. They had not been able to see them in over 30 years. The pollution levels are at an all-time low.

Become a Birder! According to Euronews it could be a bigger bird year than past because parks are quieter this year with people locked indoors. It may be a great year to start bird watching! 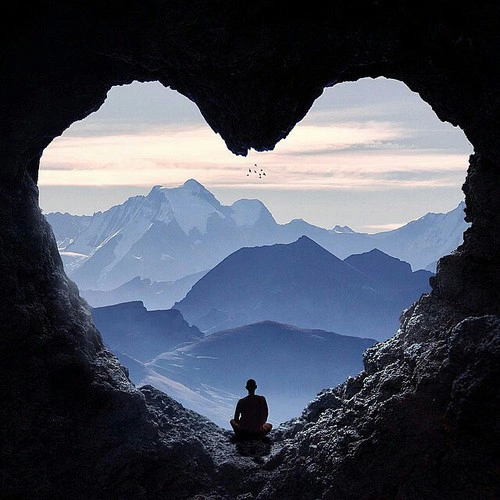 well, just MAYBE...after this is moving in a more normal direction we need to pause, reflect and figure out better solutions for us and our planet. Maybe we need to have serious discussions about working remotely, driving less, moving more, evaluate the careless & meaningless things we do…People are not bad for our planet, it is just the systems in place that seem to drive things to extremes. We need to find better ways. We need to find better ways to make our lives and our planet thrive and grow in harmony.

We are now capable of changing the planet in ways almost unimaginable even 50 years ago. In one lifetime we have gained almost complete power over all of nature (except this nasty virus and some large weather events), yet we cannot survive without our planet’s ecosystems intact. We need good food, clean water, and clean air in order to live. It has become apparent that the world will heal if left alone. It has also become apparent that as a society we can make huge sacrifices and changes to overcome a huge challenge like that which is occurring right now. Coronavirus has meant incredible damage to our traditional fuel-driven economy because it was forced upon us in such a short period of time. We have a similar challenge ahead; we must fix our planet, and it will require a great change to how we conduct trade, how we work and how we play. -happyeconews

-Peace, Love and Light to everyone.  -H