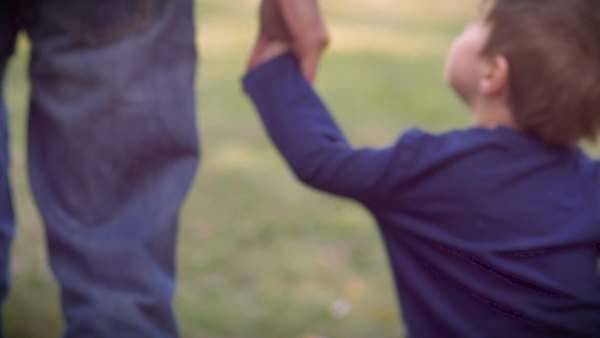 This morning I had a bit of a sad and scary situation happen.

As I was driving to the store I noticed a very young boy (maybe 2-3 years old) running down the street through the intersection in front of my daughter and I. We watched him as we turned the corner & noticed a man jogging quickly behind him about 30 feet away.

I instantly pulled over to get closer to the young child and jumped out of the car. I yelled to the man & asked him if the little boy was his child. Confused, we both looked at each other, “No. I don’t know who he is. I just began to follow him after I noticed there was no adult with him,” he explained.

I walked over to the little boy & he turned away from me, screaming and crying, and began to run back toward the intersection. My daughter jumped out of the car and began to run after him. We both followed him into the street, trying to help cars move away and around him while we tried to coax him out of the busy intersection. He did not want to listen or follow anyone.

By this time, another car had pulled over & a few people were calling 911 while we all tried to coral this youngster out of the road and into safety. He just kept his whining.

After we got him out of the street, I began to ask him questions to maybe change his pattern, “How old are you, Buddy?” “Do you know your colors?” “What color is the sky?” and on and on with no distraction or reaction. Just quiet whining. We could not get anything out of him & as we tried to hold his hand, he pulled away.

We tried and tried to get this little child to calm down, to not be afraid and actually trust us a little. We got nothing.

This made me think about life & the tough situations that may come up. What makes a bad situation worse?? We run! We don’t face our fears. We get scared. We run! What makes us run? Anger, negative emotions, situations that we don’t like, shame, worry… FEAR based feelings.  Life can be like that sometimes. We may not want to deal with a situation and the easy way out would be to run to avoid the pain.

The little boy ran away from a situation, but then was left to his fears. Things got scary. He didn’t feel safe, so he just kept running… into the street, away from people who were trying to help, further from a safe place…

As adults, we can get into similar situations of fear and would rather run than face the shame, the people who want to help us, getting the help we need, etc.

Ask yourself—wouldn’t it be easier to just STOP!!

The little boy would not say a word. He just cried and wouldn’t be calm. He resisted. He kept running, and he pushed away.

A few lessons from this:

-NO one can control anyone but themselves.

-No one can truly help unless someone wants and is willing to accept the help.

-If YOU are in personal trouble, want to avoid life, are living in fear, are acting on addictions to hide from emotions, STOP. Take a breath.

-Only YOU can find the place within that will lead you to feel safe and secure. No one can do it for you.

STOP!! Think about it.

-Only YOU can change where you are headed.

Just like the little boy–he ran and ran–into every street, every direction, away from help, and did not calm down until HE stopped and truly wanted help for himself. None of us could do anything until he was ready to take the officer’s hand and go in a different direction than where he was headed.

That is life. No one can do it for you. There are people who can try to help, but YOU have to make the choices, the directions, the steps that will take you to a better, safer place.

-PEACE, hope and LOVE to everyone who needs a hand to hold.  It is tough to see anyone struggle.

Have a beautiful day.  -H

I was just reading an article from Oprah that came in my inbox and it contained some good questions. Mind you, they were not mind-blowing questions, just questions we often forget to consistently ask ourselves, so here you go…

Close your eyes and imagine that Aladdin’s genie is standing right in front of you, right now. There’s no one else around; it’s just you and the genie. Here’s what he tells you: “I’m going to give you one wish. You can wish for anything you want, with only two limitations: You can’t wish for more wishes, and you can’t receive a wish that will take away someone else’s free will. But wish for basically anything else, and you will get it. If you wish for 10 million dollars—done! An ‘incurable’ health issue healed—you got it! A big achievement goal accomplished—victory! You get the idea. No one will ever know how you got it; they will think it just happened naturally through the course of life’s circumstances. Also, you can never have another wish fulfilled in your lifetime, and if you don’t tell me your wish in 10 seconds, you lose it.”

Okay, this is it; the moment of truth. Treat this as if it were really happening to you right now. No filtering; you’ve got 10 seconds. Close your eyes—go.

What did you tell the genie your wish was? Write it down.
This morning I have been struggling with how to help my family be HAPPY. I often feel as if I am on a roller coaster of emotions between the two people I love most, so my wish was automatically—to know and understand how to help my family find happiness.  The funny thing is, as I am writing this, I am telling myself—you can’t make another person happy. They have to find it for themselves. I know this. It is obvious, but as a wife and mother, I seem to seek some sort of knowing. I pray to know their personal needs, I pray to know how to look for guidance, I pray to be guided on each one of them, I pray for understanding, I pray for patience, I also just cry.
What would you ask for at this moment? What wish would fulfill your dreams, your hopes, your happiness? I think different moments of our lives we would wish for different things…at some point we would wish for the HGTV dream house. At another point in our life, we would wish for our child to be healed from sickness. Another moment, we would wish to have our parents here on earth. A different day we would wish to live in Hawaii. I think our wishes would constantly be changing depending on our changing seasons of life, our moments in life, our depths of spiritual growth, our emotions of the day, our wishes for our families, our health, etc.

I heard a great quote that was from Wayne Dyer’s book, Wishes Fulfilled that said, “Make your future dream a present fact by assuming the feeling of the wish fulfilled.” -Neville Goddard
Wayne Dyer spoke of constantly engaging your life with believing and assuming the feeling that I AM…healthy, strong, beautiful, blessed, in a divine relationship, happy, a marvelous gift to this world, a present mother, a loving wife… this seems like a beautiful way to ask, feel and be in alignment with a greater will for your life.  We may not have a genie’s magic lamp, but we have wisdom to use our feelings in a positive way and to help create a greater outcome of happiness, love, peace, harmony, joy, etc. within our life and within the world.
Peace and love to you today.  -H
For the other questions on the Oprah article go to this link: http://www.oprah.com/shiftyourlife/Discover-Your-Lifes-Purpose
H